Kilonova, Part 1: A Galaxy of Metaphors 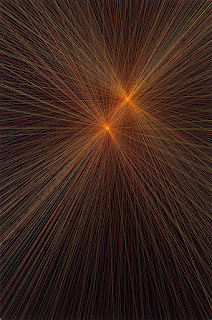 In August of 2017 astronomical observatories and satellites around the world began reporting the appearance of what appeared to be a rather intense new supernova in the night sky.  As data continued to pour in it became apparent that this was no run-of-the-mill supernova - a single exploding star - but rather the collision of two stars that had for millions of years been locked in mutual orbit, slowly spiraling toward each other until finally colliding in a massive explosion 130 million years in the past, the light and energy of that event only now reaching Earth.  By correlating data from different locations around the globe scientists were able to amass information that allowed them to prove more than a few speculative astronomical theories, among them a prediction Albert Einstein made in the early 20th century that gravity traveled in waves; they were indeed, for the first time, able to detect gravity waves.  Needless to say, the astronomical community was in quite a buzz over these spectacular observations and had labeled the event a "Kilonova".

By mid-October of that year I was not yet aware of this discovery.  That's when an artist who works in a space in my studio building, sensing quite correctly I might find this of interest, queried me if I had heard of the Kilonova.  I replied I hadn't, wondering what the hell such a funny term might mean.  She pulled out her cell phone and uploaded a website discussing the discovery, including impressive graphics and clear layman-oriented explanations.  Wee oohed and  ahhed over this for a few minutes, wherein my colleague looked at me and said "You know Jeff, I bet you could make a Kilonova."  This caught me off guard for a moment, but then, being one who loves a challenge (and this was indeed a challenge from a well respected fellow artist), I simply uttered a "hmm", and the wheels began turning in my mind.

I was barely into a new piece and decided to jettison that meager beginning and embark on my own exploration of Kilonova.  For several days I ran down many blind alleys and dead ends in my search, miles of rejected thread piling up in the trash can next to my working easel.  After awhile I began to despair that the Kilonova would elude me;  but nonetheless something was prodding me, some mysterious, veiled yet sharply pointed intuition.  Often creativity works with, if not a logic, at least a kind of order, a natural progression.  B follows A, simply because A laid the groundwork, the context, for B; without A, B just would not arise.  Yet at times C jumps in between seemingly out of nowhere, kicks you in the butt, then runs off in the mist.  In that case there's nothing to be done but follow the scent and move onward through the fog, blind but sniffing. And indeed eventually the fog began to lift and I caught a glimmer of the solution.  I grabbed that glimmer and shook it like a dog shaking its favorite stuffed toy, and suddenly the Kilonova began to unfold.  in only a few hours I had it (and yes, the image at the head of this blog entry is that very work).

I showed the result to my friend and she agreed with delight that I had pulled it off.  Curiously for me, that was not enough.  I began a series of further explorations of Kilonovas, experimenting with color combinations, element relationships, backgrounds, panel shapes and sizes.  I worked myself into some kind of creative tizzy, and in a couple of weeks I had 5 or 6 successful versions, not counting the further miles of discarded thread heaped in my trash bin.  It was then that a question suddenly popped into my head - Why am I doing this????  And just as quickly the answer appeared - I'm headed into my own personal Kilonova!!!  This was as clear as clear could be, yet I had no idea what this would mean, or how it would unfold.  Something was afoot, and it had the feel of a coming internal collision, an explosion, a burst of light and energy.

Newer Posts Older Posts Home
Subscribe to: Posts (Atom)
This is the beginning of a process, a becoming. My thoughts, feelings, sensations - long held close - now to slowly unfold like the petals of a flower, a lotus flower if you will. The lotus flower rises up from the mud of the murkiest pond, its roots deep in the muck as its petals open, floating on the surface, catching the waves of energy from our sun. From cold deep-dark moisture to warm, airy light - one continuous slow surge of being... becoming.